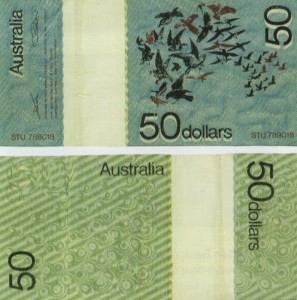 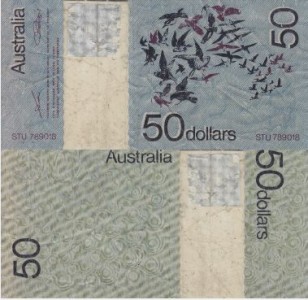 The following was presented by an NSSA member at the meeting held on 17 December 2015.

In a Roxbury auction in February this year at Lot 1197 appeared an apparent polymer trial note produced by the CSIRO (top left). In VF condition with a pre-sale estimate of $5,000, it failed to sell. Similar notes with high estimates also failed to sell in an Edlins auction.

The note (top right) was purchased from an overseas auction by an Australian dealer. It is similar to the Roxbury note, but has an additional silver square panel or OVD (Optically Variable Device). Another note seen has a different-shaped OVD.

On the website of Western Australian dealer Sterling & Currency is a story about the origins of these notes described on the CSIRO website.

The CSIRO has spent many years developing polymer notes and is credited with the technology that resulted in the current New Note Series Australian polymer banknotes issued by the Reserve Bank of Australia.

The notes illustrated show obvious signs of wear simulating public circulation. Their conditions are believed to have been influenced by a machine developed by the CSIRO called a Turbula. Trial notes are placed in this machine and subjected to abrasives, chemicals and even imitation sweat to test their durability.

It is thought that over a million trial notes of various denominations and designs have been printed by the CSIRO to test them under commercial production conditions. Only a few have been located outside of that institution, resulting in high asking prices. If such notes were be released in large numbers, they would become an affordable welcome addition to the collections of Australian banknote enthusiasts,
demonstrating one of the many phases of the evolution of polymer banknote technology.